Showing posts from January, 2015
Show all

January 31, 2015
Our second full day together as a family and we spent it at the beach! These two boys are going to be so bored when we actually get home!

In just these couple days we've been learning some fun things about our son, Tope.

*He is a joker! He loves to play pranks, such as hiding in the room or shining us with a flashlight. He will often put his finger to his mouth in a "shhh" and with a glint in his eye point to whomever he is ready to play a prank on.

*Tope is also a HUGE eater. He has eaten everything we've put in front of him, but he definetly prefers pancit (asain stir-fry type noodle), fish dipped in soy sauce, and chicken dipped in gravy. He really loves his dips!!! He also likes sweet things such as juice and bananas.

*His speech is slurred, partly because of the language barrier, partly because of a speech impediment due to his cleft lip/palate. He will often talk in his native language, but he also knows some english and seems to understand at least basic direc…
Post a Comment
Read more
More posts 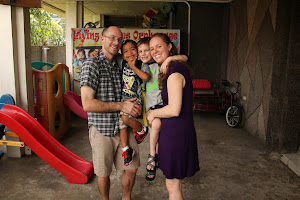 In 2012 I had at least three quilts sitting in my sewing room. They all were baby/kid quilts. All of them could be given as gifts, and yet, I had a hard time thinking about giving them away. I thought for sure that they would have been used in my house by now... But that reality stings... No little ones around to cuddle in my quilts. The Lord blessed us with an amazing son, Caleb. I am blessed a hundred times over to have him in my life. So why did I sit and think about filling these empty quilts with little hands???
Here is my family's adoption journey through the Philippines and Fostercare. The stitches that have been woven into our family because of our journey have been quite remarkable. There are days when I feel our quilt is about to unravel, but somehow God keeps piecing us together. We are becoming this beautiful patchwork. We may already show some wear, but you better believe every ounce of love is going into every stitch and every block made.